Is there a Glide/Portamento in Geist 2? I was just programming so chromatic bass notes and was wondering if Geist had a glide feature. If not this would be a great addition if this is not already on the FR list!!!!
Top

Reading the release notes for 2.0.6.5 I found that feature request 0014709 does not read like what I was meaning when suggesting it.
Morphing in this case is not meant between single graph values. It's meant to happen between (yet non-existent) graph SNAPSHOTS. That is an entirely different thing!

So how it shall work is that you can make multiple "snapshots" ("presets") of a graph each with ALL values from the given graph and then as the next step in this process blend between two graph snapshots using a single morph value.

So the process would be the following for any param "X" graph:

Automating the morph param for "X" now allows to linear blend between two totally different graphs "A" and "B".

Hope this clarifies how I meant the FR

Hello, I have two feature requests regarding Round Robin.

The first is simple: a more „intelligent“ random mode for Round Robin, that avoids the repetition of the same sample. For every programmer a very easy task.

The second one may argue about. It's a great pity, that one has to decide between the two options velocity split and Round Robin. Not in every situation I would need both options combined, but in some it would be crucial. The results would be so much more realistic and nuanced... And no thats not a feature one only needs in a drum sampler for acoustic drums, it would bring Geist2 to a entirely new level in my eyes.

Yes there are now many, many possible pads in Geist2, up to 512 per instance if one would use all of them. And if too many of them would have a lot of Round Robin Samples, then the normally possible amount of RAM would not be enough. But within the scope of an ordinary usage there should not emerge a problem with RAM or slowdown of the computer.

I made a sketch, how it could look. The question is, wether it needs also the full layer editor possibilities per Round Robin „layer“. Tuning, filter and so on - an Amp envelope would be enough I suppose. 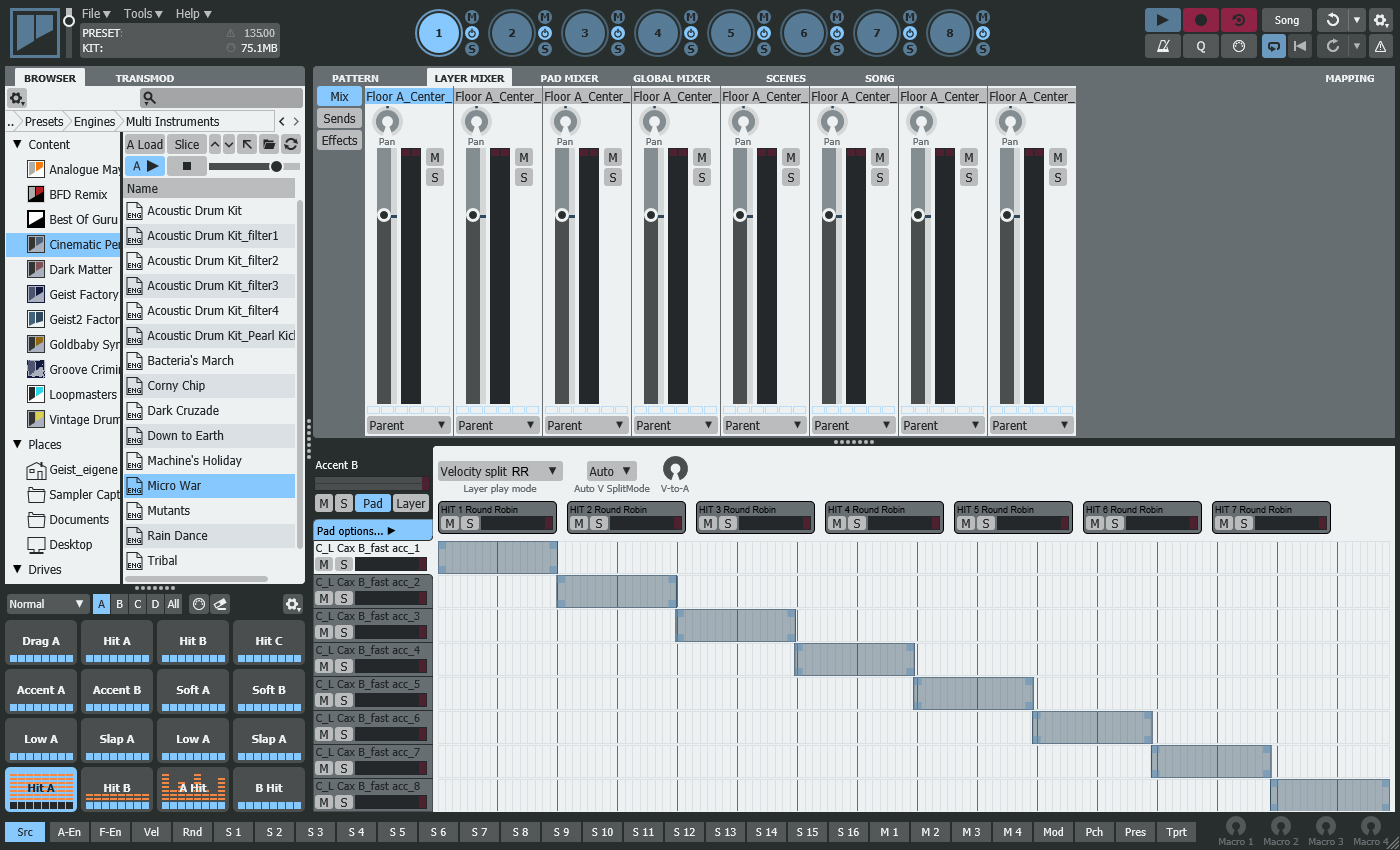 Re: FEATURE REQUEST Round Robin

extrajazz wrote:Hello, I have two feature requests regarding Round Robin.
(...)

So basically your idea is some sort of velocity / round robin matrix?
While I think this might be a good idea for some cases I assume your actual approach will most likely not be accepted by the devs as it tends to be confusing for most users. I am not sure whether there is an easy approach for everyone for a per pad sample matrix as there are rather few situations (for most users) where this could be useful.

Another solution could be to additionally allow random / round robin modes per pad "block". There are currently four blocks available "A", "B", "C" and "D" for each engine where each is having 16 pads. If there was a mode parameter that allows round robin (or other modes) per block then hitting any of the 16 pads would fire these pads in a round robin fashion. This would not increase the total number of samples slots required for Geist2 and would only change the UI very slightly (because of the option to select the trigger mode per block).
However with this per block mode the pattern editor would become an issue. Because in a mode other the the current one it should then no longer display individual pads but only "A", "B", "C" and "D" instead as these become sort of "macro pad"s.

Hmm. Well, let's see what the devs have to say

I think this may be a relatively simple feature to implement and maybe it's already part of Geist 2 and I can't find it but I think a formant shifter either in the layer/pad section (in the pitch subsection) or as an audio effect would be awesome. It's one of the few effects I find myself constantly reaching for but unable to find.

It would also be great if there was an option to keep the formant the same even when the pitch is shifted. Even if this lead to some terrible sounding effects when dramatic pitch shifting is happening, I think it would be valuable.

Thanks in advance!
Top

I would like to have a sample play mode that doesn't stop the playback at the end marker, but instead only cuts when an other pad is played.
Top

- Creating triplets and straights in the same pattern (a huge one for me)
- Being able to edit the 'double notes': in a 1/16th pattern, I have two 1/32 notes playing. I'd love if I can control the volume/pitch/pan of these individual notes.
- (already talked about in another topic) Being able to edit a pattern in song mode, without it automatically changing to the next pattern. In other words: some kind of 'pattern view lock'.
Top

improvaudio wrote:- Creating triplets and straights in the same pattern (a huge one for me)

And I still hope Paul will make it happen

could you move the post REARRANGE LAYERS in this section please? It started as a question on the workflow but it ended being a feature request...
Thanks
Top

is there a way to apply transmod to the swing dial? or even the shift parameter under each pad? I'm looking into creating less grid locked sequences and these are the first solutions that come to mind. if anybody has another way of wiggling the swing or the probability of the shift being either X or Y please do let me know. If not, i nominate these as feature requests. all in favor.....
Top

Strictly for the Hardcore II

You know it makes sense!

Ive developed a workflow of sorts (based on my Geist 1 workflow) ...I keep running into either needing to 'close' the Amp Envelope/Sample View (auditioning samples and/or manipulating the Amp Envelope) to begin drawing in patterns more clearly wiuth more space etc, or having to drag it back up to edit further. It doesnt make sense that this doesnt have its own dedicated Key Command.

This can be done non-destructively using the waveform editor in the pad parameter section at the bottom of the screen.
Top

I would like to have a sample play mode that doesn't stop the playback at the end marker, but instead only cuts when an other pad is played.

This can be acheived by assigning the Choke option to 'By other pads' as opposed to 'Not cut' in the pad parameter window.
Top
Post Reply
162 posts

Users browsing this forum: No registered users and 3 guests